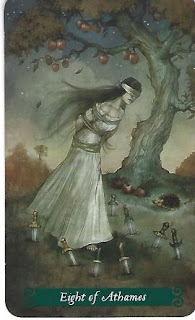 Lies, big or small are harmful and mostly reflect back on the giver of lies.  Even the small, supposedly  insignificant white lies can begin a ripple of effect.  Often one leads to another and then another and somewhere the truth can get lost, as well as a bit of our integrity and soul.  They can have the 'quantum effect'; like a rock thrown into the water causing an outward ripple of movement.  Seemingly no harm until the ripple gains momentum from another rock's ripple effect.  Best to go back to the Seven of Swords and correct the action so we are not stumbling along in the muck of our own making.

Email ThisBlogThis!Share to TwitterShare to FacebookShare to Pinterest
Labels: Seven of Swords 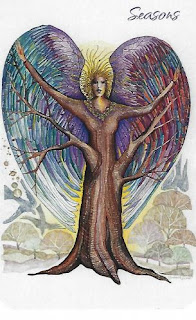